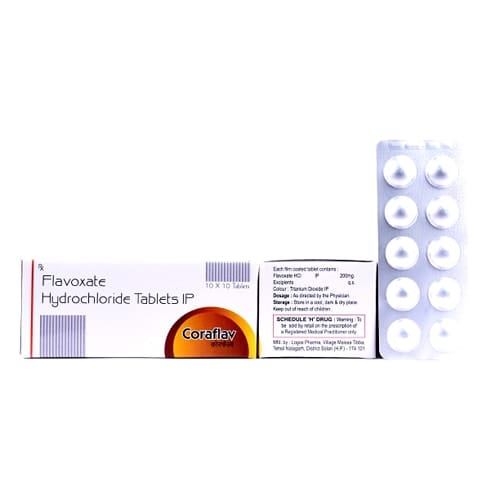 A drug that has been used in various urinary syndromes and as an antispasmodic. It may have local anesthetic activity and direct relaxing effects on smooth muscle as well as some activity as a muscarinic antagonist. Pharmacodynamics: - Flavoxate is a spasmolytic flavone derivative that acts by relaxing the smooth muscle in the urinary tract. Flavoxate is a competitive muscarinic receptor antagonist indicated for the treatment of overactive bladder with symptoms of urge urinary incontinence, urgency, and urinary frequency. Muscarinic receptors play an important role in several major cholin-ergically mediated functions, including contractions of urinary bladder smooth muscle and stimulation of salivary secretion. Mechanism of action Flavoxate acts as a direct antagonist at muscarinic acetylcholine receptors in cholinergically innervated organs. Its anticholinergic-parasympatholytic action reduces the tonus of smooth muscle in the bladder, effectively reducing the number of required voids, urge incontinence episodes, urge severity and improving retention, facilitating increased volume per void. Absorption : -Well absorbed from gastrointestinal tract. Route of elimination: -57% of the flavoxate HCl was excreted in the urine within 24 hours. INDICATION: - For symptomatic relief of dysuria, urgency, nocturia, suprapubic pain, frequency and incontinence as may occur in cystitis, prostatitis, urethritis, urethrocystitis/urethrotrigonitis.

You are looking for?