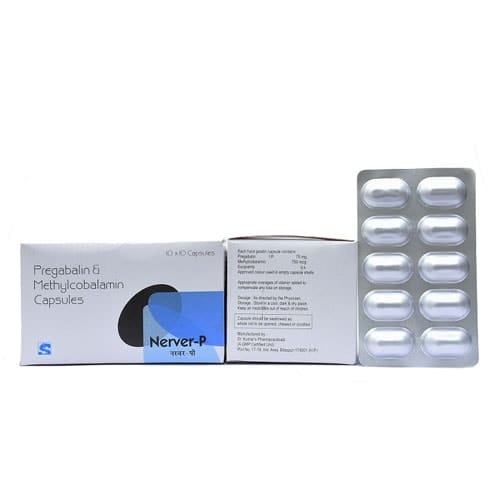 PREGABALIN 75 MG &amp; MECOBALAMINE 750 MCG Packing: - 10X10 M.R.P: - 990Pregabalin is an anticonvulsant drug used for neuropathic pain and as an adjunct therapy for partial seizures with or without secondary generalization in adults. Recent studies have shown that pregabalin is effective at treating chronic pain in disorders such as fibromyalgia and spinal cord injury. Mecobalamin is the neurologically active form of vitamin B12. Vitamin B12 comes in several kinds including hydroxy, cyano, and adenosyl, but only the methyl and adenosyl forms are active within the body. Mecobalamin donates methyl groups to the myelin sheath that insulates nerve fibres and regenerates damaged neurons. In a B12 deficiency, toxic fatty acids destroy the myelin sheath but high enough doses of B12 can repair it. Animal studies have shown that high doses of Mecobalamin are effective in neuron regeneration and that there is no known toxicity at these doses. It has been demonstrated by recent studies that combination of Pregabalin and Mecobalamin shows significantly better symptoms relief with the modest improvement of nervous system, chronic pain, perioperative pain, migraine and enhances immune system function. Pharmacology a.) Pharmacodynamics: - It binds to the (alpha2delta) subunit of the voltage-dependent calcium channel in the central nervous system. It helps to decreases the release of neurotransmitters including glutamate, norepinephrine, substance P and calcitonin gene-related peptide. However, unlike anxiolytic compounds (e.g., benzodiazepines) which exert their therapeutic effects through binding to GABA, and benzodiazepine receptors. It neither binds directly to these receptors nor augments GABA currents or affects GABA metabolism. The half life for pregabalin is 6.3 hours.Mechanism of action: Combination of Pregabalin and Mecobalamin not only decreases the release of neurotransmitters but also helps in regeneration of the myelin sheath. Pregabalin also has got analgesic activity which reduces the pain associated with neuropathy. Thus the combination of Pregabalin and Mecobalamin is useful for arresting the progress of diabetic neuropathy and also helps in relieving the pain associated with neuropathy. Mecobalamin is a co-factor of methionine synthase, an enzyme that transfers methyl groups to homocysteine to regenerate methionine. Elevated homocysteine levels are a risk factor for coronary artery disease. Methionine can be transformed to S-adenoxylmethionine (SAM) that is involved in a variety of methylation reactions in the body, one of which is alleviating depression. b.) Pharmacokinetics: - Pregabalin Absorption: Pregabalin is rapidly absorbed when administered on an empty stomach, with peak plasma concentrations occurring within one hour. Pregabalin oral bioavailability is estimated to be greater than or equal to 90% and is independent of dose. The rate of pregabalin absorption is decreased when given with food resulting in a decrease in Cmax by approximately 25 to 30% and a delay in Tmax to approximately 2.5 hours. Administration with food, however, has no clinically significant effect on the extent of absorption. Distribution: In humans, the of distribution of pregabalin for an orally administered dose is approximately 0.56 L/kg and is not bound to plasma proteins. Metabolism: Pregabalin undergoes negligible metabolism in humans. Approximately 98% of the radioactivity recovered in the urine was unchanged pregabalin. The major metabolite is N-methyl pregabalin. Excretion: Pregabalin is eliminated from the systemic circulation primarily by renal excretion as unchanged drug. Renal clearance of pregabalin is 73 mL/minute. 2.) Mecobalamin: - Mecobalamin is the neurologically active form of vitamin B12 and occurs as a water-soluble vitamin in the body. It is a cofactor in the enzyme methionine synthase, which functions to transfer methyl groups for the regeneration of methionine from homocysteine. In anaemia, it increases erythrocyte production by promoting nucleic acid synthesis in the bone marrow and by promoting maturation and division of erythrocytes. Absorption: Peak plasma concentrations after 3 hr (oral); 0.9 hr (IM); 3 min (IV).Excretion: Via urine. Indications: - It is used for neuropathic pain associated with spinal cord injury. Diabetic peripheral neuropathy. Treatment of fibromyalgia. It is also used for treatment of chronic pain, perioperative pain, and migraine. Supports the nervous system Helps memory and learning Boosts energy Helps control homocysteine levels Promotes a healthy cardiovascular system Enhances immune system function Effectively supports brain and nerve function.

You are looking for?